Virginia Tech's sports teams are called the "Hokies". The word "hokie" originated in the "Old Hokie" spirit yell created in 1896 by O.M. Stull for a contest which was held to select a new spirit yell when the college's name was changed from Virginia Agricultural and Mechanical College to Virginia Agricultural and Mechanical College and Polytechnic Institute and the original spirit yell, which referred to the old name, was no longer usable. Stull's yell won, and he received the $5 award.

Stull later said that he made up the word as an attention-grabber. Though he may not have known it, "Hokie" (in its various forms) has been around at least since 1842. According to Johann Norstedt, now a retired Virginia Tech English professor, "[Hokie was] a word that people used to express feeling, approval, excitement, surprise. Hokie, then, is a word like 'hooray,' or 'yeah,' or 'rah.'" Whatever its original meaning, the word in the popular cheer did, as Stull wanted, grab attention and has been a part of Virginia Tech tradition ever since.[2]

The official university school colors - Chicago Maroon and Burnt Orange - also were introduced in 1896. The colors were chosen by a committee because they made a "unique combination" not worn elsewhere at the time.[3] 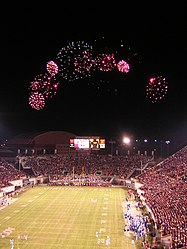 The team mascot is the HokieBird, a turkey-like creature. The teams were originally known as the "Fighting Gobblers," and the turkey motif was retained despite the name change.

The stylized VT (the abbreviation for Virginia Tech) is used primarily by the athletic department as a symbol for Virginia Tech athletic teams. The "athletic VT" symbol is trademarked by the university and appears frequently on licensed merchandise.

During the early years of the university, a rivalry developed between the Virginia Military Institute and Virginia Tech, then called VPI. This rivalry developed into the original "Military Classic of the South," which was an annual football game between VMI and VPI on Thanksgiving Day in Roanoke, Virginia. This rivalry continued until 1970 when Tech's football program became too large and too competitive for VMI. Today, Tech's major athletic rivalries include the Virginia Cavaliers (see Virginia-Virginia Tech rivalry), the West Virginia Mountaineers (the series is in indefinite hiatus since the 2005 season when the last scheduled game was played), and the Miami Hurricanes.

Virginia Tech's fight song, Tech Triumph, was written in 1919 and remains in use today. Tech Triumph is played at sporting events by both the Virginia Tech band, The Marching Virginians, and the Corps of Cadets' band, the Highty Tighties. The Old Hokie spirit yell, in use since 1896, is familiar to all Tech fans.

Virginia Tech's football traditions and the school's fans are the subject of a 2007 full length documentary called Hokie Nation[4] which features a mix of interviews with coaches, players and fans as well as a look at Hokie football history and the direction of the program.

Tech teams participate in the Atlantic Coast Conference (ACC), which the school joined in 2003 after a tumultuous trek through five different conferences in the previous decade, most recently leaving the Big East in the controversial ACC expansion.

In January 1995, Virginia Tech and Virginia Commonwealth University were ousted from the Metro Conference and subsequently filed a lawsuit against the conference.[9] The lawsuit was settled when Metro agreed to pay the Hokies $1,135,000 and Virginia Tech joined the Atlantic 10 Conference, along with fellow newcomers Dayton and LaSalle in June 1995.[10]

In 1999, the Big East agreed to accept Virginia Tech as a full member in all sports. Virginia Tech ultimately paid $8.3 million to join the conference, $1.1 million of which was actually paid after the school left.[11]

In April 2003, Mike Tranghese, commissioner of the Big East, dropped a bombshell — that the ACC was secretly trying to lure away Big East members.[12] Over the next several months, the ACC held meetings and discussions. Ultimately, Virginia Tech was invited to join the conference, along with Miami. Boston College was added the following year. Virginia Tech finally had achieved what Frank Moseley had sought so long ago — membership in the ACC.

When Virginia Tech was invited to join the ACC, former Roanoke Times sports editor Bill Brill expressed his displeasure, saying "Virginia Tech will not win an ACC championship in my lifetime."[13] When Virginia Tech's football team proceeded to do precisely that in their very first season in the league, Brill's house in Chapel Hill, North Carolina received hundreds of mocking phone calls from angry Virginia Tech fans, curious to learn when the funeral arrangements would be held.[14]

Template:Main The Virginia Tech football team has held the Commonwealth Cup, given to the annual winner of the Virginia Tech-University of Virginia game for over 2,000 days. Virginia Tech has won 10 of the last 11 meetings against their in-state rival, last losing to UVA on November 29, 2003 by a 35-21 score at a game played in Charlottesville.[15] Tech last lost to UVA in Blacksburg during the 1998 season by a 36-32 count.[16]

Template:Main Women's soccer at Virginia Tech began in 1980 with 2 club teams under the guidance of Everett Germain and his 2 daughters Betsy and Julie. Women's soccer has made great strides over the years and continues to be very successful. Recently, the Virginia Tech soccer team brought on a new head coach, Charles "Chugger" Adair, who was formerly the Associate Head Coach, where he acted as the recruiting cooridnator and head scout for Virginia Tech, as well as assisted with player development and management. Virginia Tech woman's soccer currently has two assistant coaches, Pete Pososki and Eric Lycan.

Virginia Tech's recently retired baseball coach, Chuck Hartman, finished his career as the fourth winningest coach in Division I baseball history with a 1,444–816–8 record, including a 961–591–8 mark in his 28 seasons at Tech.

Template:Main Since starting its varsity program in 1996, the Virginia Tech softball team has played in six conference championship games, winning both the ACC regular season and tournament titles in 2007.[17] Under head coach Scot Thomas and behind the strength of one of the nation's best college pitchers, senior All-American Angela Tincher,[18] the Hokies made their fourth consecutive NCAA Tournament appearance in 2008. On May 25, 2008, they defeated the fourth-seeded Michigan Wolverines to advance to their first College World Series.[19] On March 26, 2008, Tincher pitched a no-hitter in a 1–0 exhibition win over the United States Olympic softball team, ending their 185-game winning streak.[20]

Virginia Tech Ice Hockey was formed in 1984. They joined the newly formed ACCHL in 1995 and have competed there ever since. The team won the regular season champion title during the 1996–97 season with a record of 13–1. The Hokies play out of the Roanoke Civic Center and drew the biggest crowd in team history of 5,200+ to the VT vs. UVA game on January 19, 2007. They became the first non-Carolina team to win the Canes Cup on January 14, 2007 by defeating the Duke University Blue Devils, NC State University Wolfpack and the East Carolina University Pirates. During the 2010-2011 season, the Hokies turned towards a more competitive conference, the Mid-Atlantic Collegiate Hockey Association (MACHA), where they play in the same division against Liberty, East Carolina, Maryland, and UMBC. In the 2011-2012 season, the Hokies earned a berth in the ACHA Division II National Tournament for the first time in program history, finishing 12th in the nation.

The Virginia Tech rugby team was founded in 1968, although the first recorded college rugby match in Blacksburg dates back to 1891.[21] Virginia Tech rugby plays in the Atlantic Coast Rugby League against its traditional ACC rivals such as the University of Virginia. The Hokies finished third in their conference in spring 2012.[22] The Hokies won the college division of the July 2012 Cape Fear 7s tournament.[23] The Hokies also defeated other ACC teams to win the 2012 Virginia Tech 7s, beating NC State 22-5 in the final.[24] The Hokies are led by head coach Andy Richards.

The Virginia Tech College Bass team was founded in the 2006-2007 school year, and won their first national title that same year.[25]